A Zither Without A Name

A Zither Without A Name

Here's an Arion Zither I bought on eBay.de that Sasha has properly repaired/ restored for me. He says it has a 'sweet sound' so I am happy I did not purchase a lemon. You never know when you purchase sight-unseen/unplayed. Impatiently waiting for him to send it to me once repairs are complete.

The question is: who is the manufacturer.. Anyone have a guess? There is no number or name inside or out anywhere, just the photo of a chalet in the soundboard.

And does anyone have an idea how old it is? 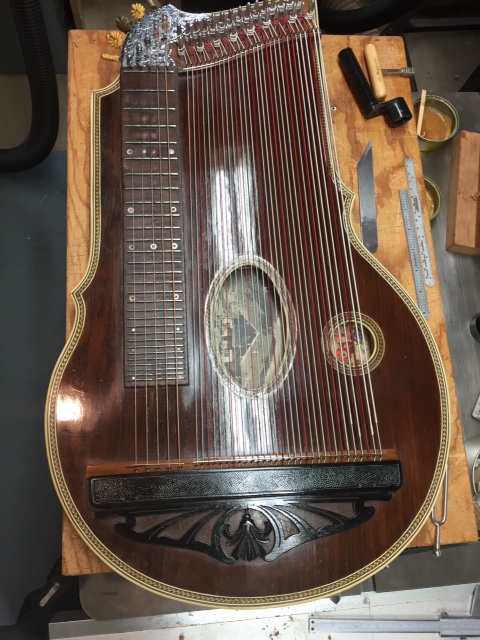 Re: A Zither Without A Name

Ken- Another beautiful job by Sasha! He has refurbished two zithers for me and they are beautiful: one is an Alto Zither which has been with my family for many years, and the other one is a nice little Schwarzer which I picked up inexpensively from eBay a year ago (also sight unseen). Despite the latter's small size it has a big sound. Check both out on this forum under Repairs Restorations. My Alto is similar to your new Arion: no maker's label and no maker's signature to be found. Similar to your Arion, mine has two sound holes beneath the Accompaniment, Bass and Contra strings, and a sound hole at the picking site of the fretboard. I am guessing that the Alto dates to 1890s/early 1900s due to the era of the family member who owned & played it.

It looks like you have a very beautiful instrument, and best wishes with it! What brand of string do you have it outfitted with?
Top

Re: A Zither Without A Name

Thanks for the message. You may be right about the age- Sasha seemed to think that was from about that time too.

Interesting point about the strings: Sasha put Lenzner Fisoma strings on this one- I've never tried that style before. On my Glier concert zither I just switched to Lenzner Soloklang and they sound better because its a small instrument and the bergfees were too subtle for me. But on the Schwartzer Perfekta, I have Bergfee Greens which are good for such a large instrument with such long strings.... so my point is that strings seem to need to fit the type of zither you play.

I'll check out the photos of your instruments; thanks
KP
Top
Post Reply
3 posts • Page 1 of 1