The Circle of Fifths

The Circle of Fifths

In my quest to be a better Zitherspieler I'm taking a few music theory classes at the local college. During office hours the professor was trying to figure out the instrument- coverting the open strings to his keyboard a few feet away, and noticing the pattern: 2 descending fourths then up a fifth, then 3 descending again etc. He doesnt know of any other instrument that has this pattern within the circle of fifths. And I'm wondering too.Does anyone know the reasoning for it? And why the strings begin with Eb and end with G#, which seems rather random as well.
And my second question would be- I took this photo from the old A Daar music book. Notice that the open strings start with Ab instead of Eb. I dont think I've seen any zithers with that extra string, have you? 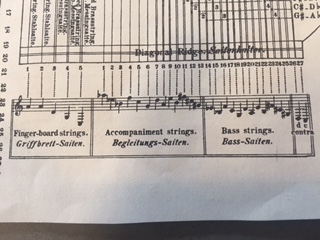 The old "6 string griffbrett" zither I keep in Germany had the first accompaniment peg empty when I got it, then started with Eb Bb, etc. The strings have since been moved one peg toward the griffbrett. This is an old instrument; pegs, not a machine, for the griffbrett.

Ab is the common way of writing "a flat", which (on equal tempered instruments) is the same sound as "g sharp".

If you read this article about Weigel, you see how he tried to standardize zither tunings back in the second half of the nineteenth century.

Also, a translation of Stang's comments on Darr in this article:

Note translator Jane Curtis's footnote regarding the "a flat" vs. "e flat" issue toward the bottom of this article:

" The accompaniment strings of most zithers today begin with ab [Translater's note: This is no longer true today.],"

Interesting that in Darr's "New and Complete Instruction Book for the Zither", Darr himself describes the "old zither" as having only 17 to 20 strings - and other sources on the Zither.us pages indicate the griffbrett C string was introduced during Darr's lifetime.

Yes interesting, but none of you have answered the question: Why the strings descend Eb to Bb, then ascend at F, then descend C to G, then acend at D, etc.
Top

Answer this question - "What is the meaning of life?"

OK, back to SOP. From those Zither.us articles, it sure sounds like the stringing used today was worked out over at least a century, from the "17 string old zither" of around 1800 to the ones used today. Weigel apparently was responsible for the string arrangement standardization, so we'd need to know what he was thinking. And unfortunately he was almost a recluse who left very little written material.

If you're just asking about the "ascend/descend" issue, I'd think that also comes from years of tradition, experimentation, and experience, wire gauge and tension, and of course Weigel to pull it together.

My untrained eye sees a similarity between zither accompaniment strings, and accordion chord buttons, which also follow the "circle of fifths".

The circle of fifths is one of those basic building blocks of Western music. For those of us who improvise over a chord progression it gives you reasonable predictability of what the next chord os going to be. I broke a lot of strings when I first started trying to tune that first accompaniement string to Ab. I think it was dropped because it's not really very practical to have the circle begin there. Having Eb be the first one puts the G, D, C and A in a more comfortable placement on the instrument. The octave flipping makes it all work out just fine. If you start playing a lot of scales on the bass and accompaniment strings, you will soon see the patterns emerge and it all makes sense. The Hintermeyer books help with that. I worked a lot of it out on my own. Having the strings in the Circle of fifths means that the three chords you need for most light music are all adjacent. It's the same arrangement that you find on the accordion and there autoharp, all invented by Germans and came about at the same time as the zither did. If this doesan't answer the various questions still out there, let me know and I'll try and do better.