Is anyone aware of a chord chart for the fingerboard (like those for guitar) that might be available on the net? I was looking for a good G7 chord. Thanks
Top

Tenor or "four-string" guitars are frequently strung C G D A or even G D A E, not unlike the griffbrett. Might this be a help?
Top

Also helpful might be googling "four string banjo chords" or the site acousticmusictv.com , which does have a chord chart for a 4 string C G D A banjo, including the G7 of interest.

Excellent suggestion. Thanks so much, Rudi
Top

There is a Thomas Fürst (Mittenwald) zither currently listed on e-bay.de.

Are those chord markings on the griffbrett? or what?

I can't see the markings too well, Rudi, but they look like the note for each position with its corresponding location on the staff. Rather a good idea for the beginning player.
Top

I made this diagram (attached to the post as a jpg) a while back to help me keep track of some chord shapes and voicings on the griffbrett. It may be helpful toward what you're looking for. I can make a cleaner version, the handwriting is messy as I intended this primarily as my personal memory aid. It is in Munich tuning (a a D G C).

A quick guide to the diagram: The first half of the first line contains voicings for Major chords, the second half is voicing for Minor chords, and the first half of the 3rd line contains a few voicings for dominant chords. Beneath each chord I have written a set of numbers which represents that particular tones position in the chord (1 is for root, 3 is for chord-third, 5 and 7 for fifth and seventh).

The two lowest rows of the page are another potentially-useful diagram which simply displays griffbret shapes between any two intervals (well, a few basic intervals anyway). This is a useful reference both for melodies and harmonies. The intervals of the Major and Minor 3rd and the Major and Minor 6th, in particular, serve as a very sweet harmony line when added to many a melody.

For both of these charts, I have not chosen a specific pitch as the root note - the shapes are fully movable. The pitch which is labelled '1' for the diagram should be matched to the root note of the harmony. So, if you are playing an F7 chord, you can use any of the griffbrett shapes under Dominant 7 so long as you make sure you are playing an 'F' where the diagram says 1. Of course, because most of the Dominant voicings I provided are rootless (that is, they only contain the 3, 5, and 7), you will have to use one of these other chord tones to 'place' the shape correctly (For the case of F7, 3=A, 5=C, 7=Eb). Because this can be a bit confusing, I recommend using these chord shapes in keys with which you are already well-familiar, as thinking about the 3rd, 5th, 7th, etc, while trying to play in time can be a bit confusing!


I hope this will be helpful! Good luck with the zither!

edit: My apologies for the large image! 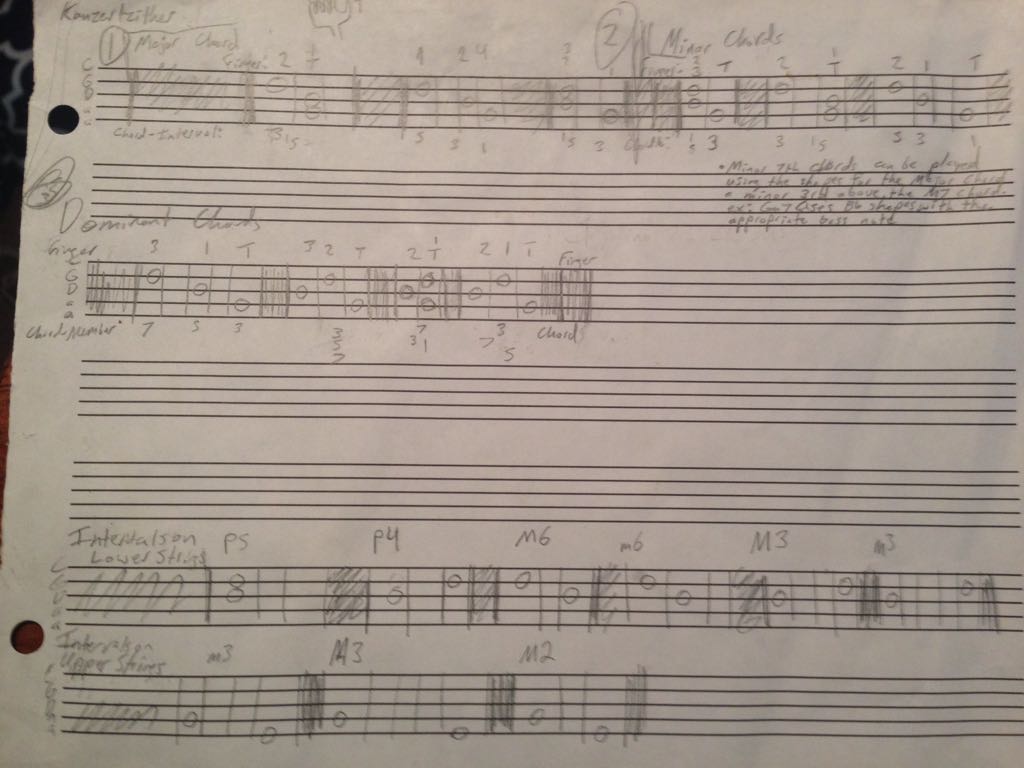