My wife bought me an AKG Pro Audio C411/PP Vibration Pickup for Stringed Instruments, and a small portable amp as an anniversary present. Unfortunately, the pickup requires power and the little amp doesn't have phantom power or input for the 3pronged pick up jack.
What type of amps do other zitherists use? And does anyone know of a small amp that could work for my pick up? If it were portable I could take it to the park or the beach as I'm wont to do.
KP
Top

Not really portable, but you could get something like this: http://www.amazon.com/dp/B000QCKJDU

That will provide phantom power to your mic and also convert the output from XLR to 1/4".

Another option would be to get a dynamic pickup that didn't require phantom power.

Or get a battery-powered PA that does have an XLR input with phantom power. (A quick Google search led me to this: http://www.amazon.com/dp/B002BSH9T4 although that looks like it doesn't give you anything in the way of EQ, which you might want.)

If the amp doesn't need battery power (i.e., you have a place to plug it in) then there are several good, portable PA systems that would do the trick, as well as guitar amps that are designed for acoustic guitars, which are more likely to feature XLR and phantom power (such as the Roland AC-60).
Top

John Snyder has a portable amp solution, so I asked him for details. Here’s his reply:

I’ve been using the Bose Soundlink Bluetooth Speaker (I, versions II and III are now available) which are about 2” x 5” x 10”, including a 6 - 8 hour lithium battery and optional wired input that accepts the headphone output of phones, tablets, and computers.

For live zither playing, the wired input is essential to avoid the time-lag involved with a Bluetooth connection (unless you want to simulate playing a pipe organ with distant pipes!). Note however, the wired input is expecting a headphone-strength signal, so a pre-amp of some kind is needed (such as a DI box, see below).  (The StringMic® for Zither includes guitar-amp and headphone outputs.)

Note:  there are now LOTS of portable bluetooth speakers available … it’s often easy to try them out by using a zither recording on your phone to link to a demo unit via bluetooth.  Be sure whatever you’re considering has a wired input option.  Also, units smaller that 2” x 5” x 10” are likely to have very weak bass.

For your AKG Vibration Pickup, you can solve the phantom power and balanced 3-prong mic/pickup input jack issues with a Direct Inject (DI) or USB box designed to accept mic/guitar inputs and output to a mixing console or guitar amp … and has a 9-volt battery to provide phantom power for your AKG pickup/mic.  Two old examples I have are a Behringer Ultri-DI D120 and a Project Series USA Dual Pre (which also has headphone output).  (About $40 - $100.)  Both accept a 9-volt battery to provide phantom mic power.  For some DI boxes, you might need a special adapter cable to go from the 3-prong balanced mic connector to a balanced 1/4” Tip-Ring-Sleve (TRS) balanced plug.  All available at your local/web Guitar Center.  Best to take your AKG mic with you to check cables, phantom power, DI box at the store using one of their acoustic guitars and guitar amp.

The USB Dual Pre accepts both 3-pronged and 1/4" inputs via the same dual-purpose jacks.  On the back, it has the 9-volt battery cover; the switch for phantom power is just below the headphone output jack.

The Behringer Ultra-DI D120 has balanced/unbalanced 1/4" inputs (for 3-wire TRS and 2-wire TS inputs), but only has 3-wire balanced output (common for sending on to a mixing console); an adapter would be needed to feed a guitar amp.  The 9-volt battery compartment is on the back. 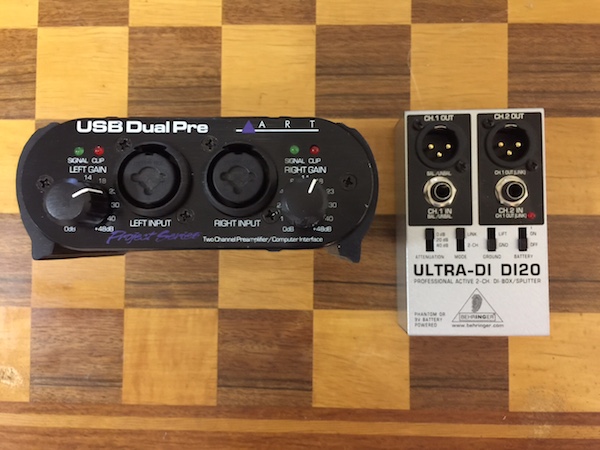 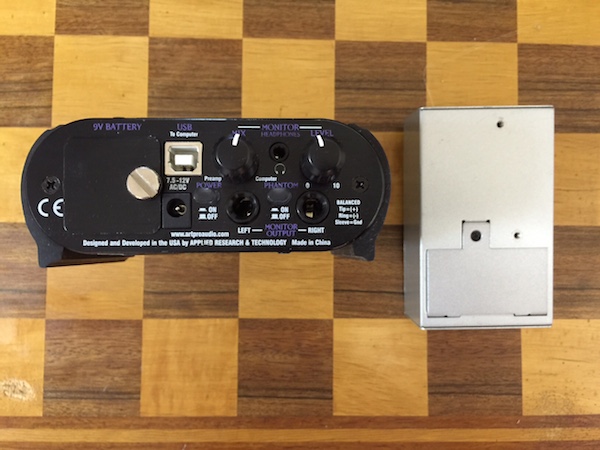