Do you have information regarding zither supplies, such as rings, strings, tables and sheet music? Are you looking for a reliable zither, or have one to sell?

Does anyone out there have experience with a six string griffbrett?

I do not, but in each case I've heard that it's a low F, behind C. Some time ago, Will van Garderen shared a photo of Rudi Knabl playing a six string zither. The image was taken in The Netherlands in 1977 at an event in Hilversum. His note follows:

I’ve known Rudi since 1973 (met him during a zither-concert in Mannheim) so since 1974 we became friends and I liked him a lot, he was very famous all over the world. His nickname was the Paganini of the zither, but still a very nice person. The zither has 6 strings on the fretboard — below the C string there is a lower F string. This particular instrument was built by Günter Voigt, son of Kurt Voigt, in Markneukirchen, Germany. 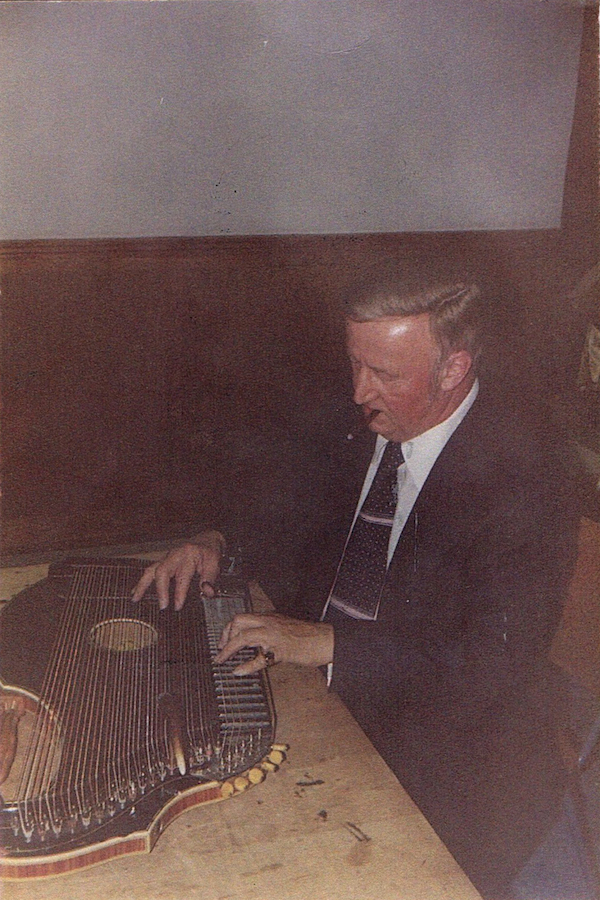 and it looks like one possible combination tried was the eaadgc .

Griffbrett string length can be defined as the length of the string from the right hand wire support to the left hand or "0" fret.

The Griffbrett string length on the Förg zither here is 43.5 cm.

The Griffbrett string length of the Meinel "Quint" zither of Ludwig Kalbrunner is approximately 37.5 cm.

The griffbrett string length of the un-named 6 string Griffbrett zither in Essenheim is 39.0 cm. Is this then a "Quint"? Or?

The 390mm is a fairly standard viola string length which makes a CGDA tuning very reasonable. A lot of older zithers are a shorter string length. The 375mm is getting very short for a viola string length and could certainly be meant for a higher tuning. In the end you just have to put some strings on it and see how it sounds. Often a shorter length will sound fine with the right strings at a lower tuning. There are so many other factors involved. My test is to put a string on, tune it to pitch and see what it sounds like. If the pitch is stable and it frets reasonably, great. If the sound is dull, short and lifeless, I try a thinner string. If the sound is wobbly and unstable I try a thicker one. String length is only one factor in tone and stability of sound. Just my 2p.

Return to “Zithers and Resources”