Is your zither in need of repair? Do you have questions on how to best maintain your zither, or have advice? Post your questions and advice here.

Hi Ken, thanks for the info. At the moment I'm playing on the 38 string Wunsche concert zither. The Perfekta zither is still not fixed yet, I aim to sort it out in a few months when I've got some funds together. I have ordered the 42 string harp zither from Wunsche (I should get it at the end of this month) and have asked them to fit the Lenzner nylon strings on the fingerboard as well. Apparently they state that these strings still have good volume and with good playability so we'll have to see. If for any reason there's a problem I'll just carry on with the regular strings. Its all part of the learning process I guess. I'll let you know how it works out. Cheers.
Top

Hello Quince.
I am a Brit living in Australia.
Did you manage to get anybody to repair your Zither?
I have repaired a lot of stringed instruments in my time.
I do not have a name. I am not well known.
But my work quality has been remarked upon by many in a positive way.
I realise your instrument is valueable.
I also realise that Zither makers would rather stay with what they are doing and not enter the repair programme unless it is their product and a workmanship fault has occured.
My approach to your Zither in particular would be to remove the bridge completely.
I would soak water under the bridge ( to melt the glue ).
My first guess is that the maker used animal glue which dissolves ( in time ) and like violins, will with careful handling , dissolve.
PVA will also disslove with heat and water.
They would have used one of the two.
I would then clean up the glued areas, re glue and clamp the end of the body... and then making sure that tha bridge sits perfectly flat, glue and clamp it where it should be.
I have hilighted the process that I would use.
I am not in this game for money.
It will only cost you your postage to Australia and back.....thats it.
You do not know me.
I can post you pics of instruments I have made if you wish.
You have challenged me!
If you decline my offer,
l will respect your decision .
With the utmost respect and understanding.
So ...as we say downunder ....There yago Mate!
Pete

Ps... How are you getting on with your new Zither........lucky man!
Please post what you are doing as we are all very nosey!
AND really want to know at Zither.us

Just another incite as you are presumeably British?
I am also an ex soldier which does not help with matters Zither!
But what might help is... He who dares WINS !
Clue!
Pete
Top

Hi Pete, thank you for your message. I have replied once already but some thing must have gone wrong and my reply didn't appear, so this is my second attempt. I agree with your method of repairing the bridge. However, though the zither is in great shape there are some other issues. Some of the pins are loose and need replacing. The frets are very worn so it may need a new fingerboard, the action when it was strung was quite high so a new fingerboard should bring it up to a more modern play ability. I would like the feet to be replaced with rubber tipped ones like on the Wunsche zithers, they are realy nice. The present ones have had their pins filed down. All this is specialist work so feel I must contact some people in Germany but I'll keep you in mind so thank you for that. As to how I'm doing on the zither, I'm doing fine. I now have the Wunsche 42 string harp zither. I have been teaching my self since May last year. I am now sixty seven so I've left it a bit late to ever be a great player though I have been learning stuff on YouTube and some zither music books. My only gripe is getting used to the string tension on the fingerboard. I have asked for the Lensner strings with a nylon cor but they just sent me the regular type, ( Wunsche and Schneider Music ) very strange! I think I'll try ordering non phosphor bronze next time as I think phosphor bronze is slightly higher tension, I know this from playing the guitar. Perhaps some one on the Forum can explain some thing about fingerboard string tensions, and what my be recommended. Thanks Pete, Cheers, Quince.
Top

Hi Quince.
I am also 67.
It is never too late to have a go on what you dream.
I did not get the bit about your Zither needing a new fingerboard....
In that case then, it would be beyond me.
I have done guitar refrets but the Zither frets are a different thing altogether.
I could have sorted thd loose pins issue by boring out and replugging them.
It is a lovely Zither snd I hope you manage to find someone to repair it.
I also had a shock on how hard one had to press ( fret) the strings on the Griff Bret.
My Adolf Meinel is kinder to my left hand than the Framus.
The action is Fractionally lower but these tiny fractions kf a millimeter make a hell of a difference as i have discussed with Tom.
You have a brand new top model zither now so I understand so it will not be the Zither.
Yes...different strings can be bought but my main offending strings are the two A strings that are almost tensioned enough to cut cheese.
I have been told....that is the way with the Zither, to grow Calluses and battle on.
I am now in my fifth month ( i think ) and my fingers are starting to toughen up.
I can play for an hour now before my fingers get really sore.
When I first started I could only manage five minutes so that is progress.
Pete
Pete
Top

I keep a baggy of biscuit cutter shavings available. One or two (about the size of an eye brow) will tighten up most loose pegs. Look for a local cabinet maker.

Dave Kyger has a good source for rubber zither feet; pin type are preferred by this student, although the sight of them makes some German relatives nervous. Do the rubber cushion effect the resonance?

Hope the Meinel from Mainz makes it in one piece this weekend....

.....and to repeat, this student didn't really get serious about trying to appreciate the zither until after retirement (63y), and will hit the big eight-oh this year. Keep on learning...if you are not moving forward, you are moving backwards....and keep the social network going...not having a social "network" has as much health risk associated with it as smoking a pack a day...

Thanks guys, I'm starting to realize now that the zither is realy a very different animal to any other string instrument, but that's a good thing as now I know there's nothing wrong and that its just me being new to this instrument. Fortunately my fingers have thick callouses from playing the harp guitar and guitar for many years so I don't feel any soreness at all. There is some aching at the top of my left forearm though, and my ring finger some times locks up, but that's how it goes. I can play some simple waltzes so far. Two notable ones I gleaned from YouTube is from the playing of Magdalena Pedarnig. Langsamer Landler by Peter Moser and the Herzallerliebst Waltz by Herbert Pixner. She plays so effortlessly I think her fretboard strings must made from angels hair. She's wonderful! Cheers, Quince.
Top

Did you get the sheet music?
rudi
Top

Hi Rudy, no, I just listen to the notes being played. If you can see the person playing its a great help, as you can see their finger positions as well. I have often worked stuff out from listening to recordings. ( on the guitar ) You just listen to one phrase at a time till you get it and then move to the next bit till you got it all. This is a good exercise for the ear if you don't have the dots available. Cheers, Quince.
Top

Hi Ken, a while back we were talking about my Perfekta zither which needed some work done. I emailed Horst Wunsche and asked them if they restored old zithers thinking they wouldn't be interested as they would be too busy building new ones. They replied saying they could rebuild it! brilliant. I sent it off strait away. They had the zither for about 6 months but I was not in a great hurry to get it back as I knew it was in good hands. I've just got it back now and they've done a great job. They fitted new pins, refurbished the finger board, replaced the feet with rubber tipped ones and fitted a complete new bridge! impressive. It's also set up well with good playability and yes I can reach the contra strings while playing, owing to them being tuned in 5ths as well. They only charged 641 Eur for the work. These guys realy are skillful. I'm wondering how old it is. The label looks like what I think must be the early designe so could it be around 1920-ish ? Cheers, Quince. 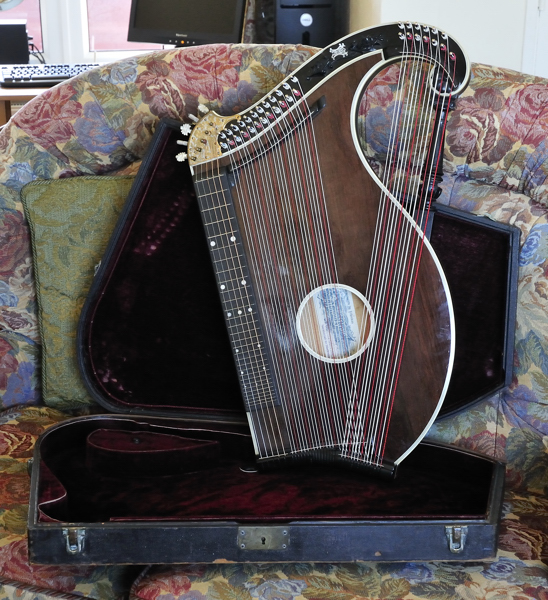 Congratulations on your newly refurbished Anton Bräuer Perfekta zither. I have found some information which may be of interest:

Return to “Repairs and Restorations”