Harmonics on the Free Strings

This forum will provide lessons for getting started and exercises for gaining proficiency.

Very good! Here is something you may like to try on the fingerboard: 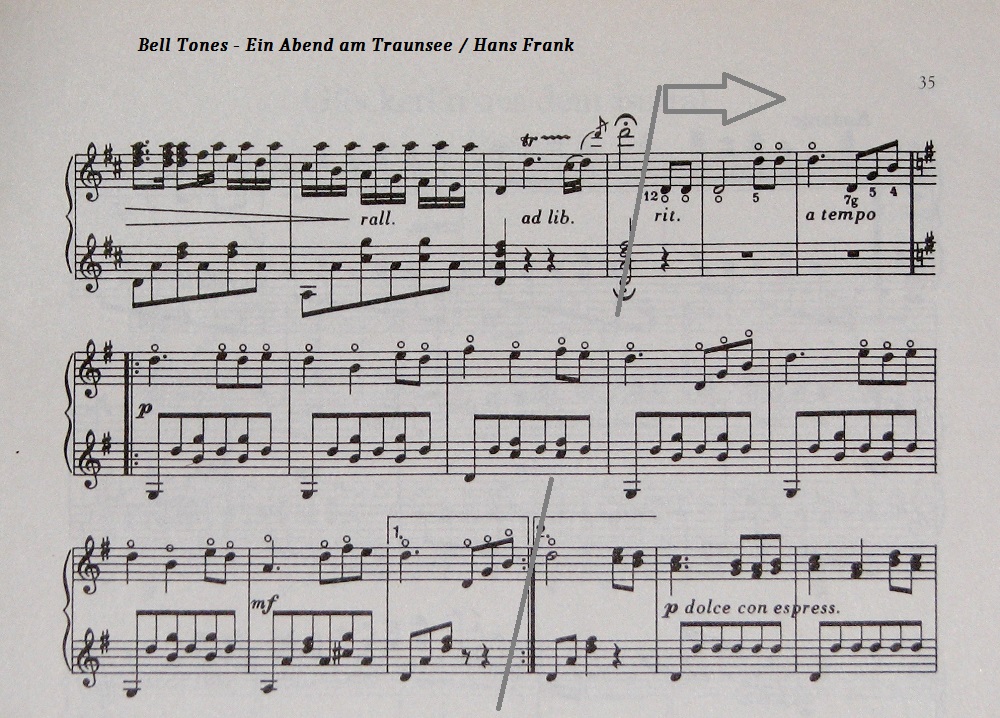 Thank you Evelyn and Andy for the encouragement. I finally got up enough courage to try some open strings on a "home-made" arrangement of "Loisachtal". "Home-made" so that even a beginner like me had a chance to "get 'er done" Hope the attachment comes across,

Here are a couple of tips to make sounding the harmonics a bit easier. You can use the 12th fret of your fingerboard as a guide for the closer accompaniment strings and you can then "guesstimate" the other octave locations by moving up a bit toward the luftresonance from there. You can often use an irregularity in the grain of the top or some other visual aid to make locating the harmonic point easier. Here is a tip that you don't hear about often. Plucking the string strongly and closer to the bridge helps a lot. The closer to the bridge that you play the sharper and cleaner the tone. It favors the odd numbered harmonics. It also makes the octave harmonic come out easier. It does take a bit of practice, but in the end, it can be very effective technique. With practice you can even get chords to come out. Happy New Year to everyone!

Please forgive me for being confused. Could it be that the two of you are talking about different things?

I was simply making the point that where the right hand plucks the string makes a difference in how easily the harmonic sounds. Everyone else is addressing what the left hand does in lightly touching the node point of the string to get the particular harmonic required. You have to use both hands. How the string is plucked does make a difference, so I guess the answer is yes. We are talking about two different things.
Ken bloom
'http://www.boweddulcimer.org
Top

Thanks Evelyn and Ken,

Ken, are you referring to "flagolets" as described in the method of Kabatek (lesson 54ff, page 44)? The Kabatek method is available on this site.

http://www.zither.us/files/Kabatek_zither_method.pdf (hope my typing is accurate)


I was referring to playing the accompaniment strings (with right hand close to the bridge as usual) with the second and third fingers of the right hand striking the accompaniment strings as usual, in harmony with the melody played on the griffbrett, generally as described in Darr (Appendix lesson 32, score 69, page 45). Darr presents an entire series of scores (#69 ff) in this fashion; I only included a few such notes in the Loisachtal score attached above. You have to start somewhere.

Flagolets are fun to play around with, but way beyond my skill level at this time. My father usually closed out his practice sessions with "Traunsee", flagolets included.

Hi Rudi,
Yes we're talking about the same thing. We're just using different terms to name them. I never got my info for doing harmonics on the zither from zither books. I just transferred what I already knew and used from playing guitar, mostly using the octave and fifth harmonics as those are the easiest to get nice and clear. Since I do keep my right hand fingernails longer than most zither players I sometimes use the nail to pluck with to get a louder, more ringing note from the harmonic. The first time I heard this on the zither is an album that Rudi Knabl did that is mostly solo. He has a whole section of the Lullaby of Itsuki that is done entirely on the accompaniment strings using harmonics. this is a very intriguing album. He is pictured on the front holding a Perfekta zither with a six string fingerboard. I hope this clears up some of the confusion.
Ken Bloom
http://www.boweddulcimer.org
Top

Could someone let me know the English names for the various components marked below, please. 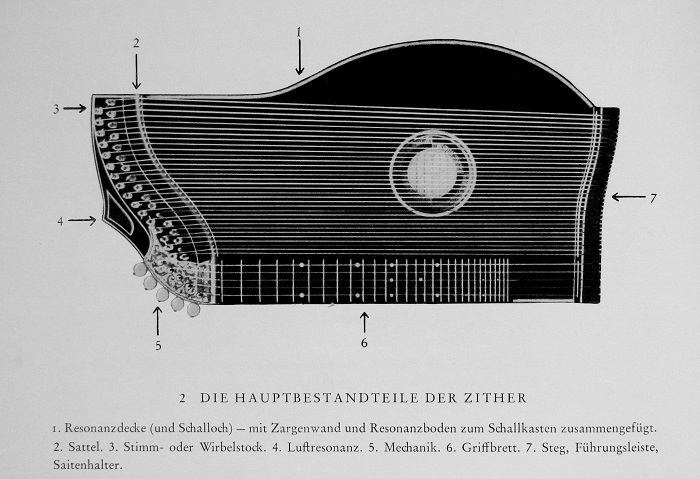 Now that we have established that we are talking about a form of accompaniment, the following may be of some use - found in Volkstümliche Zitherschule by Adalbert Albrecht, Teil 3:

Again, if someone could let me know the English names I would be very grateful.

(I've not looked into the method developed by Prof Richard Grünwald, which is a different school altogether.)