Due to frequent traveling, I have had an eye on it for some time already.
Now, on a recent trip through Munich, it has happened (look at the pictures here for more details:
https://www.musik-hartwig.de/zither/eig ... appzither/ ).

Of course, there are compromises in sound volume - basses are a little thin. But I do like the overall timbre; in particular, it's a good fit for pieces meant to be played softly. After all, it's a travel/practice zither by design, rather than a performance instrument. And I already practiced much more than I would have without it (photo is from a hotel room)! 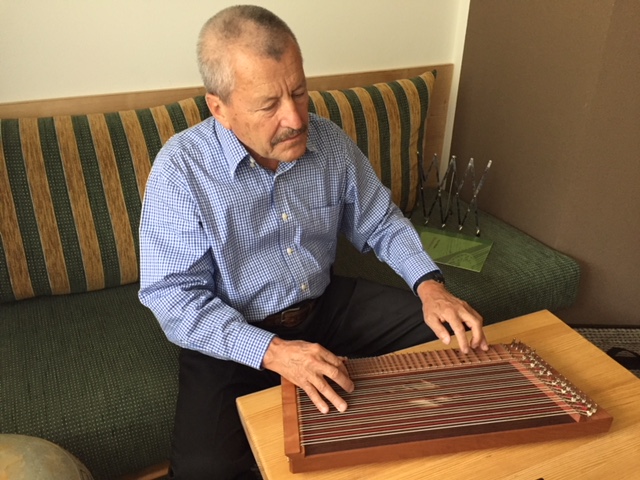 Wow What a great idea. Definitely the opposite of my perfekta zithers which take up evem more room than a harp zither. The split, double box idea is brilliant. If you wanted to be able to hear more volume you could always put a pickup on it and play through headphones. All in all, a fabulous way to keep up your zither chops on the move!

What a clever construction! How easy is it to disengage the two halves held by the magnets?

Wouldn't these be terrific student instruments for school-age kids learning the Zither in a group as kids do with violin, etc.

Thank you for sharing the photo of your new find!
Top

The strength of the magnets is perfect for the purpose: rock solid when locked yet fairly easy to separate by bending the two halves apart. I find it easier and quicker to set up for play (or to put it back for storage in its zippered bag) than a standard zither out of its unwieldy case.
You are right, young students would like it (just like myself, ha-ha ...); but they need to be somewhat affluent. It runs close to 2K even without VAT.
Top
Post Reply
4 posts • Page 1 of 1