Our zither group performed on the 4th Sunday of Advent at Zion Church of the City of Baltimore. The program included several instrumentals, and also songs with zither accompaniment. For those interested, I've attached the program for the event, as well as two photos. One shows our zither group of five. The other includes the four members of the Arion Gesangverein. 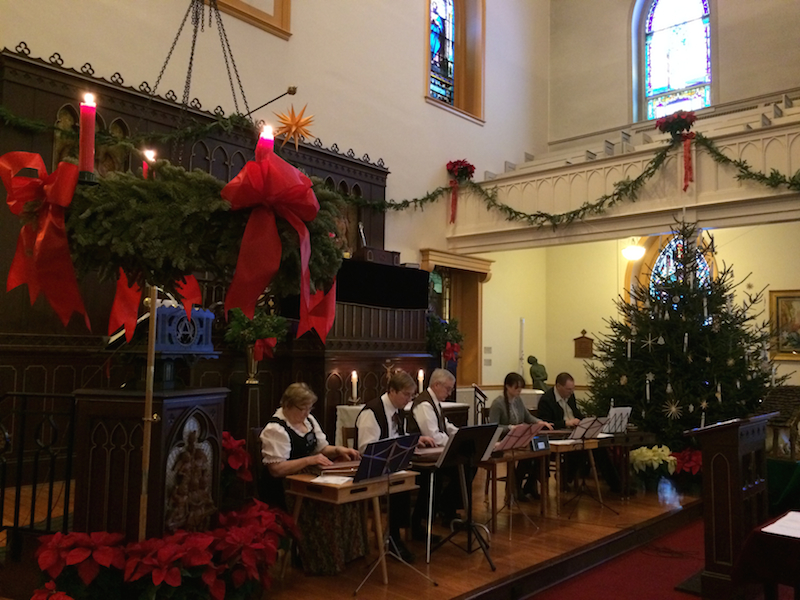 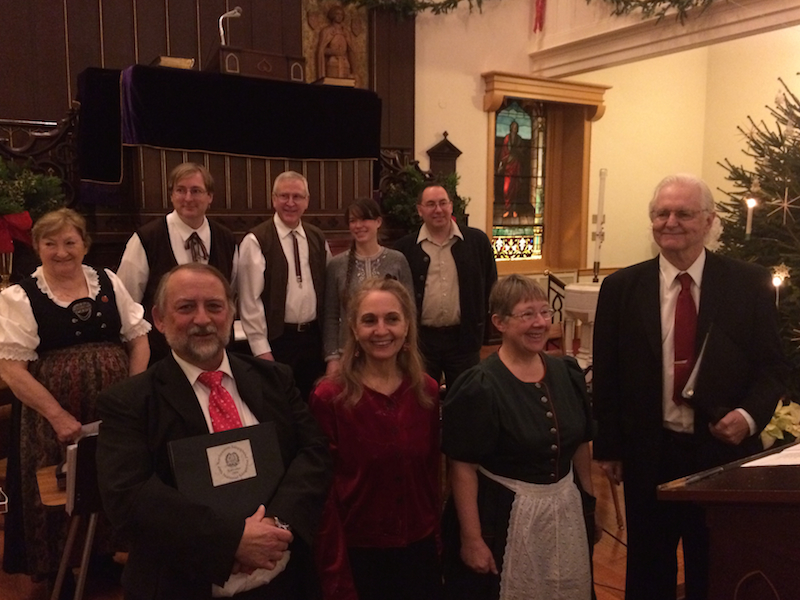 Well, I am new here and try to accommodate with the different topics. Together with my husband (Andreas) I (Elena) try to learn the zither. We live in Germany but in our region it is more common to play the trombone and trumpet (we are both in a Posaunenchor) than the zither. Our teacher died almost 2 years ago and now we struggle alone with the strings. But it is nice and rewarding! And we are amazed and encouraged by your example. Thank you for posting the pictures and the program from the 4th Advent.

Just out of curiosity, about where are you located? Could the Deutscher Zitherbund help find players and teachers in your area? One player here in Wisconsin drives about 100 miles one way (160 km) for monthly sessions.

But you do have each other, and the harmony of multiple (even/especially two) zithers is without compare.

Thank you, Rudi Mueller and velocio, for welcoming us! We live in south of Thuringia in a little village (Marisfeld). Our former zither teacher lived about 20 km from our place and we drove weekly to his home for 4 month. He was not only a very good zither player but also a very good and devoted zither teacher (he even had zither classes at the community college before 1989). His aim in teaching us was to give his knowledge to others. In fact only I (Elena) was supposed to learn to play and it was his idea to teach us both (a very good idea, indeed!). Thank you for the address of the zither bund. We tried to find a new teacher several month ago (and yesterday again) but with no good result for us (75 km x 2 is too much for us). Now we do our best alone. Maybe someday we will find somebody to help us. If not we keep going on with our zither books. Yes, you can find some zither players in Thuringia. We even know somebody but he is not playing after notes. The zither is something totally new for us, but we are "old" in music (trombone, trumpet, flute, mandolin, Blockfloete ...

Thank you for the encouragement you are for us! Have a blessed weekend

Elena and Andreas, you have an in depth music background. Your mentioning "Blockflötte" brought to mind our local Bavarian group, which includes a Blockflötte, or "recorder" player.

There is a notebook series titled "Volkstümliche Weihnacht" which includes a separate book for several instruments, including one for zither/hackbrett and another "für 1 oder 2 C-Blockflötten"....one or two C-recorders. Our daughter in Germany obtained the recorder book off of www.ebay.de, and it is a gem! In reality, it is written for two part harmony for 2 instruments, with accompaniment noted with letters beneath the score. This series contains notes for 30+ of the most traditional German Christmas music, and should work out well for 2-part zither groups

I (we) will probably end up using the recorder series more than the zither series.

Dave - do you have any recordings (e.g. YouTube or sound files) of your zither ensemble at the Christmas Sing, or otherwise?

Tom, I do not have a recording from the Weihnachtssingen program. However, I did bring along a microphone to one of Jane Curtis's zither seminars. Among the selections we worked on, I particularly enjoyed this piece, Allemande, by German composer Samuel Scheidt (1587 - 1684).